(January 11, 1918 – July 17, 1990) An American aerospace engineer who worked on safety-critical systems for the U.S. Air Force. He is best known for his namesake Murphy’s Law, which  states, “Anything that can go wrong will go wrong.”  Murphy regarded the law as crystallizing a key principle of defensive design, in which one should always assume worst-case scenarios.

Keeping Major Murphy’s principle in mind, what are the critical steps contractors can take to get their projects off on the right foot, and bring them to a successful conclusion – while keeping Murphy’s Law out of the equation?

The first key to having a successful contract is to have a contract. It sounds obvious, but contractors are sometimes induced to start work, or perform change orders / additions to contracts, without an executed document in hand.  Maybe the project owner is in a rush, “We need for you to start right away so we can be completed on time.  We’ll do the paperwork later.”

The contractor wants to maintain good will.  They proceed in the hope that their responsiveness will pay off – and sometimes it does.  There are also times when the contractor incurs costs that are never reimbursed because the contract is not executed.  There could be engineering problems, governmental interference or lack of funding. There are any number of reasons for things to go wrong (as our hero indicated.) And for the contractor, they are all bad.

On the other hand, let’s say there is no problem with the contract.  The paperwork is signed, the work proceeds, is paid for, and the contract is completed with a profit in hand. Is that the end?

No, not quite. Just like there is paperwork to get into the project, there is more to get out of it.  The contractor should obtain written acceptance of the work by the job owner (obligee.) 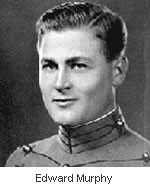 These simple procedures are basic, good business practices. Contractors who win work competitively, and are paid under a lump sum contract, already face significant risks.  It is important to have the correct paperwork in hand when starting, modifying, and ending construction projects.

Major Murphy learned this important lesson the hard way – but you don’t have to!

FIA Surety is a NJ based bonding company (carrier) that has specialized in Site, Subdivision and Contract Surety Bonds since 1979 – we’re good at it!  Call us with your next one.